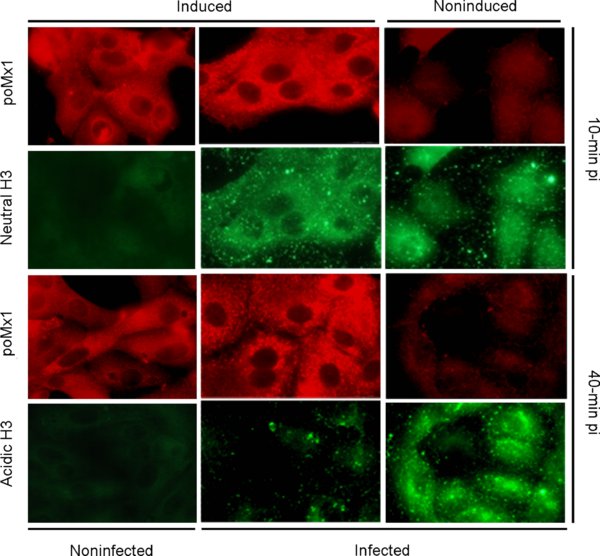 The traffic of incoming viral particles is blocked by poMx1 after internalization but before the acidification-induced conformational change of viral hemagglutinin in the late endosomes. Induced and non-induced cell monolayers were infected with a dilution of the H3N2 influenza A virus stock (m.o.i. ~ 200) and examined 10 min (upper half) and 40 min (lower half) pi after immunostaining of poMx1 (in red) or viral HA (in green). Ten minutes pi, internalized viral particles were detected by labeling the neutral form of the viral HA with N2 mAb. The results are similar for induced and non-induced cells. Forty minutes pi, internalized virus particles having arrived in the perinuclear region were detected by labeling the acidic HA form, this time with the A2 mAb. Non-induced cells show conspicuous staining of acidic HA in the perinuclear region, but induced cells do not. In the latter, traffic to the late endosomes is thus delayed. (A color version of this figure is available on line at www.vetres.org.)