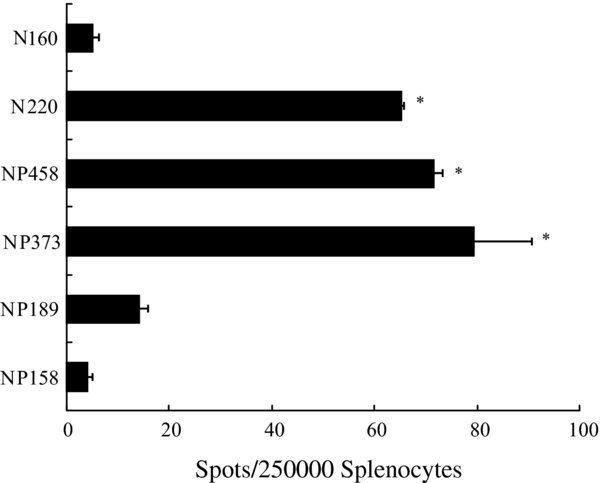 A graph presenting the results of the ELISPOT assay. Mice were immunized with NP158HHDpBudCE4.1, NP189HHDpBudCE4.1, NP373HHDpBudCE4.1, and NP458HHDpBudCE4.1 by gene gun delivery three times at 1-week intervals. N220HHDpBudCE4.1 was used as a positive control. One week after the last immunization, the splenocytes were collected and cultured with corresponding peptides for 24 h. The secretion of IFN-γ was measured by the ELISPOT assay. The N160 peptide (LQLPQGTTL) was used as a negative control for the assay with the mice vaccinated with N220HHDpBudCE4.1. The results represent the mean ± SE (n = 4). The p values were calculated by the student’s t-test (*p < 0.05) on comparisons between sample data points and the negative control data point.