The "raison d'être" for this special edition of Veterinary Research, entitled: Mucosal Immunology in Domestic Animals is two-fold:

(1) A summary of the existing knowledge in the veterinary field is clearly useful for the rational design of mucosal vaccines and other aspects of animal health, with commercial and animal welfare implications. (2) However, it is also an attempt to illustrate the value of domestic animals in more fundamental aspects of mucosal immunological research. It is clear that the majority of foreign antigens are encountered via mucosal surfaces. This is true for harmless substances such as food and the huge mass of commensal bacteria. It is also true for the majority of pathogens, which frequently gain entry into the organism via the vast and relatively permeable mucosal tissues. However, the field of mucosal immunology is as yet relatively unexplored in comparison to the study of the systemic immune system, the traditional field of the immunologist working with rodents. Therefore, the classical questions for the mucosal immunologist: "How can the mucosal immune system discriminate between harmful and harmless antigens?" and: "How does it decide whether to mount appropriate defensive or tolerant responses?" are as yet only partially answered. Clearly, rodents have been and will remain the focus of scientific research, originally because of cost and ease of handling, now also because of the availability of transgenic animals and other research tools such as immunological reagents. However, their small body size makes them at best inconvenient and at worst impossible for such subject areas as cell migration, immune development and the study of relatively rare and inaccessible cells such as mucosal dendritic cells. There is also considerable evidence of immunological differences between species, and the study of a larger array of species, albeit mainly mammalian species as in this collection of reviews, can only contribute to a more fundamental understanding of immune mechanisms. Therefore, rather than looking at species differences as an obstacle in the path of our attempts to understand a functional immune system, we can turn this around and interpret it as an opportunity to broaden our understanding of the basic principles underlying immune mechanisms, as well as a chance to utilise different species for the study of different aspects of an immune function, always bearing in mind that species differences do exist. Apart from research based on our interest in such species as food sources or as our companions, veterinary species offer us the accessibility of rodents, the advantages of size of humans as well as their phylogenetic diversity for studies designed to complement the knowledge gained from the more traditional objects of our research. We hope that this volume of Veterinary Research demonstrates that this opportunity has already been grasped in the research carried out with veterinary species. The current issue includes reviews on many topics relevant to mucosal immunology: the anatomical features of the mucosal immune systems in several animal species, the dynamics of mucosae-derived immune cells, the innate and adaptive immune effector mechanisms at mucosal surfaces and the use of these concepts for the development of innovative mucosal vaccines. It only remains to thank all contributors for their hard and conscientious work and their willingness to throw a few novel and possibly controversial ideas into the arena! 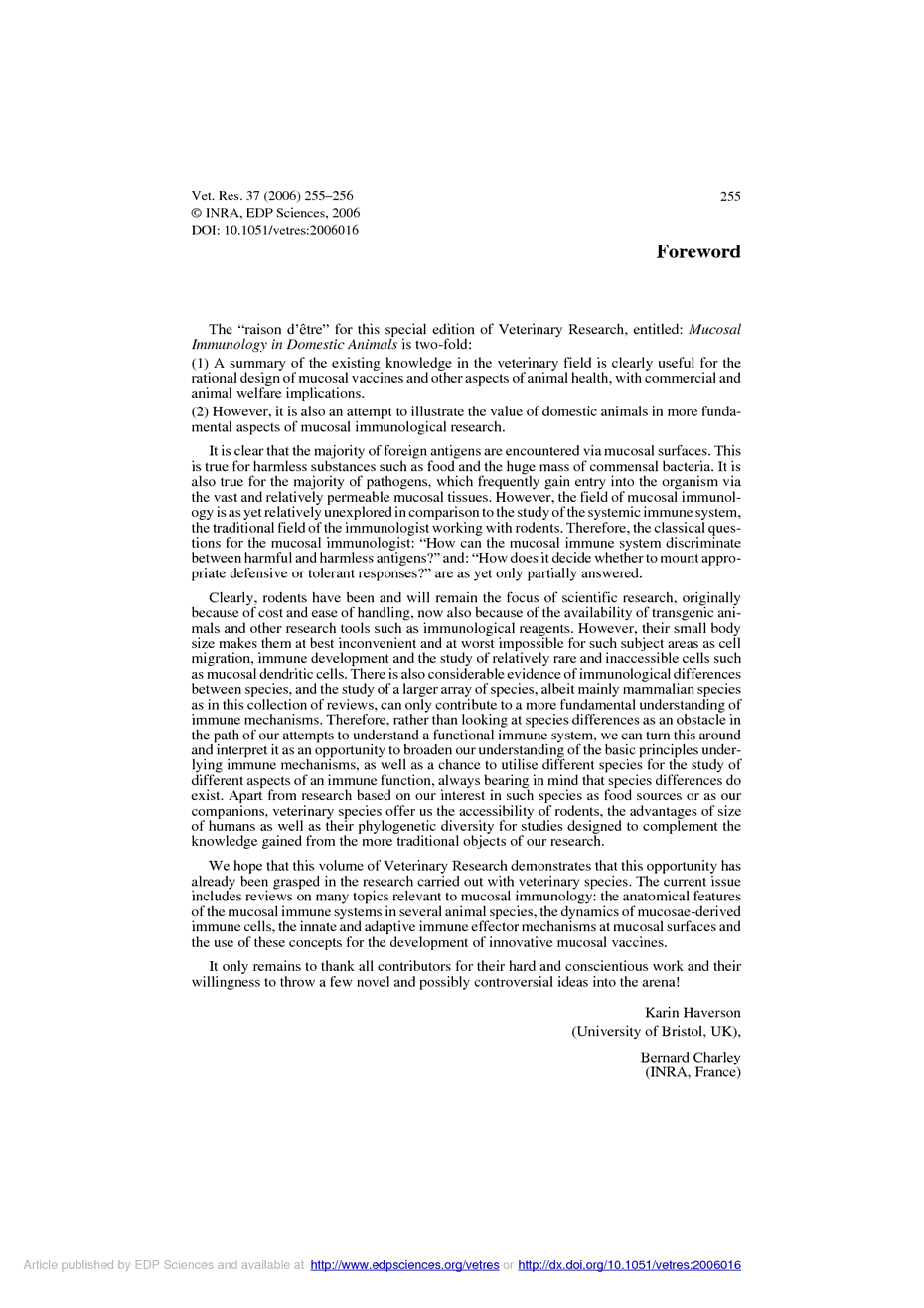