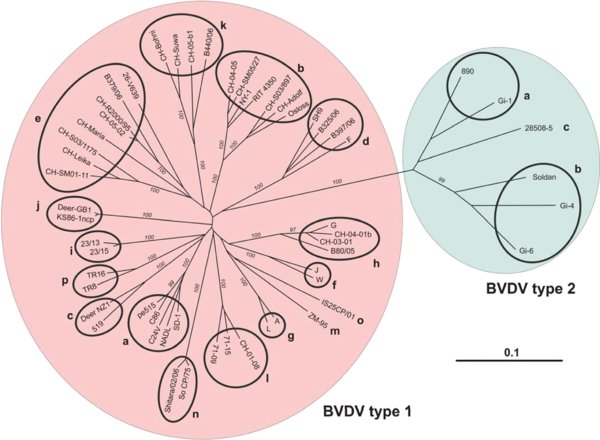 Phylogenetic analysis and classification of BVDV based on Npro: The phylogenetic tree that represents the genetic relationship of BVDV strains was constructed from 349 nucleotides of the Npro coding sequences. The genetic analysis was calculated and the figure prepared as described for Figure 2. The sub-genotype BVDV type-1l was assigned according to [36, 39]. The strains So CP/75 and TR8/TR16, which were also labeled as BVDV-1l by [5, 102] and [104], were renamed as BVDV type-1n and -1p, respectively. BVDV sub-genotypes m, n, and o were named as in [70]. All other groups were assigned as suggested by [97, 98]. (A color version of this figure is available at www.vetres.org.)