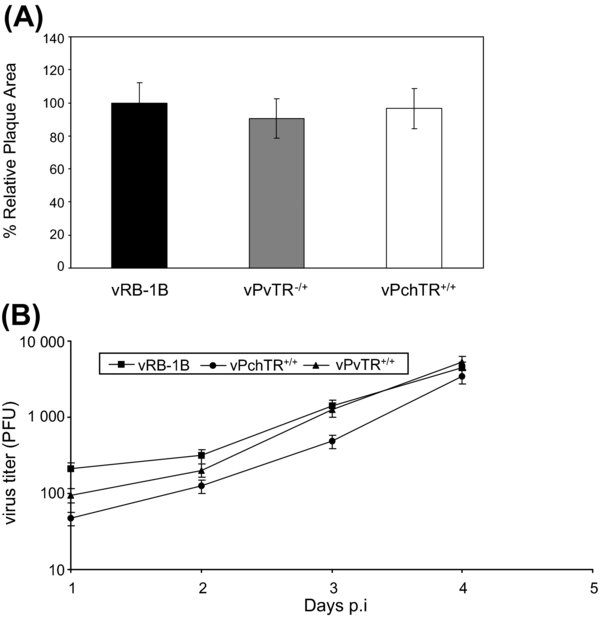 (A) Relative plaque sizes induced by vRB-1B, vPchTR+/+ or rescuant virus vPvTR+/+. CEC were infected with the viruses and at day 5 p.i. cells were analyzed by IIF with anti-pp38 MAb 011 and Alexa Fluor 568 goat anti-mouse IgG (Molecular Probes). For each virus, 75 random plaques were photographed with a digital camera (Axiovert 25 with Axiocam, Zeiss) and plaque sizes were determined using ImageJ software. The mean plaque area of the wild type vRB-1B virus was set to 100%, and average relative plaque areas of vPchTR+/+ and the vPvTR+/+ were calculated. Means and standard deviations (error bars) are given. (B) Multi-step growth kinetics of vRB-1B, vPchTR+/+ and vPvTR+/+. One-million CEC were infected with approximately 100 PFU of the indicated virus. At the given times p.i., cells were trypsinized, titrated and coseeded with fresh CEC. At day 5 p.i., cells were fixed; permeabilized and viral plaques were counted after IIF. Mean virus titers and standard deviations (error bars) of the results of two independent experiments are shown.