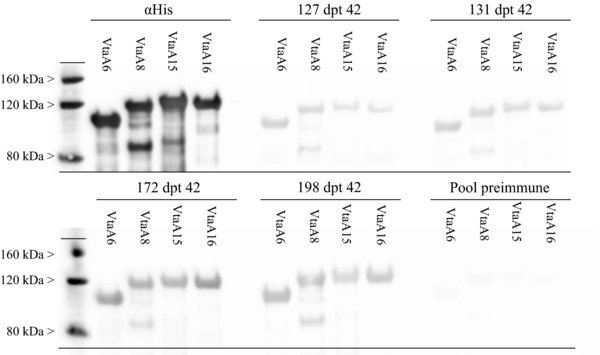 Cross-reactivity of antibodies generated against VtaA of the H. parasuis Nagasaki strain with orthologues of strain HP1319. Sera from animals undergoing a subclinical infection (127, 131, 172 and 198) were used in immunoblotting experiments with recombinant VtaA15 and VtaA16 passenger domains cloned from H. parasuis strain HP1319. All VtaA were purified, and 1.5 μg of each were used in the immunoblots. Positive controls were VtaA6 and VtaA8 while the negative control was pooled pre-immune sera. αHis: Monoclonal antibody against histidine C-terminal tails.