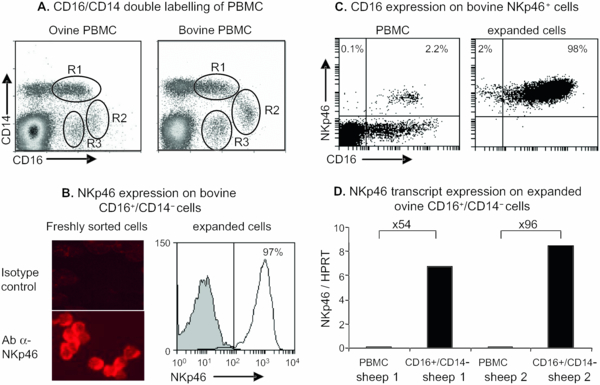 Analysis of CD16 expression on PBMC and NKp46+ cells, and NKp46 expression on CD16+/CD14− cells. (A) PBMC freshly obtained from sheep and cattle were double labelled with anti-CD16 and anti-CD14 mAbs. Three populations of CD16+ cells were defined: the first expressed CD14 at a high level (R1: CD16+/CD14high), the second expressed a low level of CD14 (R2: CD16+/CD14low), and the last did not express CD14 (R3: CD16+/CD14−). Data shown are from 1 animal representative of 8 sheep and 4 cattle. (B, left) Freshly sorted bovine CD16+/CD14− cells were spotted on slides and labelled with an anti-NKp46 mAb or isotype control mAb. (B, right), bovine expanded CD16+/CD14− cells were labelled with the NKp46 mAb (solid line, empty histogram) or the isotype control (shaded histogram); the plot is representative of 2 animals. (C) Bovine PBMC and sorted then expanded NKp46+cells were double labelled with anti-NKp46 and anti-CD16 mAbs and analyzed by flow cytometry. Numbers indicate percentages of positive cells in each quadrant. Data shown are from 1 animal representative of 4. (D) The NKp46 gene transcripts in ovine CD16+/CD14− cultured cells or PBMC were quantified by real-time RT-PCR. Values are the relative NKp46 mRNA to HPRT mRNA ratios. Increases (-fold) in the level of NKp46 expression between PBMC and CD16+/CD14− cells are indicated above the bars for each animal.