Erythrocyte susceptibility of the 19 tested sheep estimated by the growth of B. divergens Rouen 87 F5. For each experiment and each sampling time, sheep were attributed a number (from 1 to 19) corresponding to the susceptibility of their erythrocytes (from the most – number 1 – to the least – number 19 – susceptible). Sheep were then classified according to the mean rank obtained across experiments. The separation of sheep into three groups was performed by the dynamic clustering method (Xlstat) on these susceptibility rankings. The table summarizes the classification based on 4 separate experiments where susceptibility was estimated at different time points by parasitemia counts (P in bold) and/or A405 measurements of the corresponding culture supernatant (A). Parasitemia data are either the mean of two repetitions (Exp. 1) or the parasitemia of the iRBC pellet obtained by mixing erythrocytes from the three cultures used to measure the absorbance (Exp. 2 and 3). Absorbance data used are the mean of triplicate cultures. 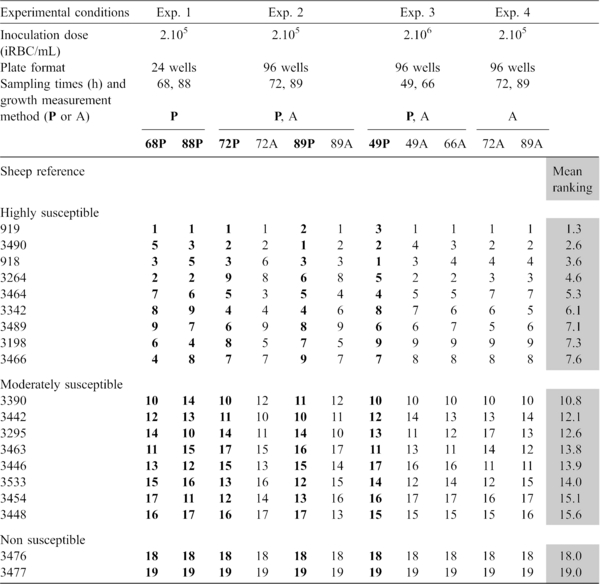