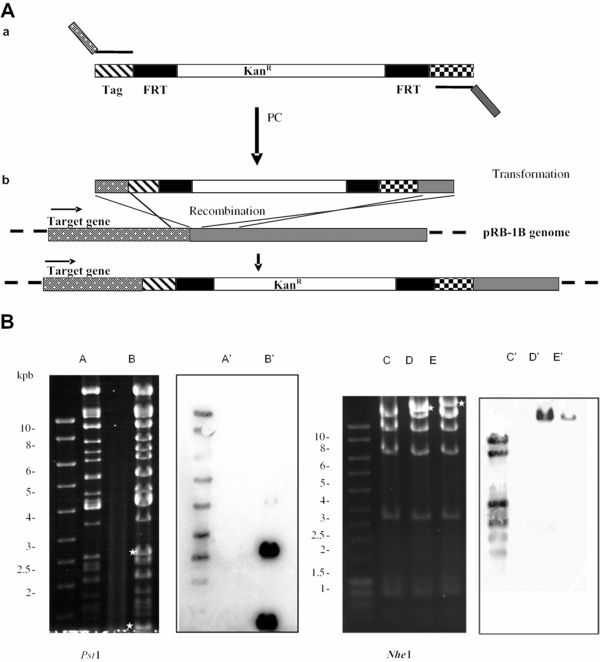 Tagging of viral genes. (A) Schematic representation of the tagging strategy: (a) A DNA fragment beginning with the HA-encoding sequence (hatched box) and including a kanamycin-resistance cassette (KanR) flanked by the FRT sites (filled box) was amplified with primers carrying an extension of 45-48 nt homologous to the region immediately upstream of the translation stop signal of the target gene (dotted box) and to a region downstream from it (shaded box). (b) The modified sequence was incorporated by homologous recombination in pRB-1B. (B) Restriction enzyme digestion and Southern blot analysis of tagged pRB-1B clones. pRB-1B (A) and pRB-1Btag17 (B) DNA were digested with PstI, while pRB-1Btag49 (D) and pRB-1Btag48 (E) and, as a control, pRB-1B (C) DNA were digested with NheI. Asteriks indicate new fragments in tagged BAC DNA. Southern blot analysis revealed the presence of the cassette in the newly generated fragments (lane B′, pRB-1Btag17; lanes D′ & E′, pRB-1B tag49 and 48 respectively).