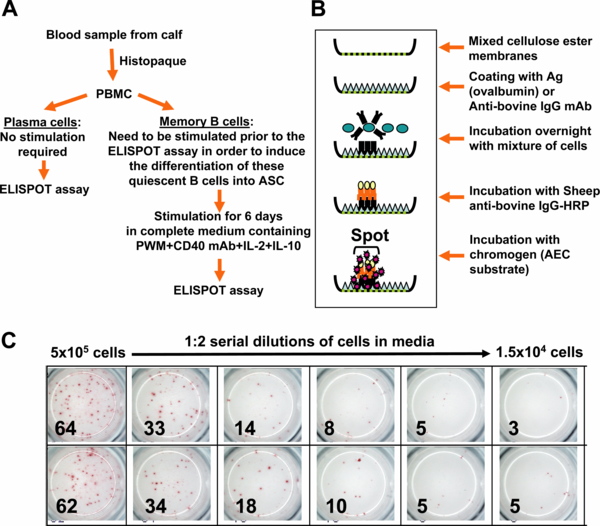 Protocol and schematic representation of the B cell ELISPOT assay. (A) The B cell ELISPOT assay was performed with freshly isolated and 6 day-stimulated PBMC for the detection of plasma cells and memory B cells, respectively. (B) Schematic procedure of the detection of ASC by ELISPOT. (C) Ovalbumin-specific ASC enumeration: in this example, freshly isolated PBMC from a naïve calf immunised 7 days previously with ovalbumin were incubated overnight in pre-coated ELISPOT plates; the cells were seeded in duplicates (upper and lower wells) starting at 5 × 105 cells per well and performing 1:2 serial dilutions down to 1.5 × 104 cells per well; at the end of the assay, ASC were enumerated by counting the red-coloured immunospots (number indicated in bold in the lower left corner for each well) and results were expressed as ASC number per 106 PBMC (here, 144 ± 2 ASC per 106 PBMC were detected).